I like it because I have pretty good leadership skills, and it’s a really good way to help the community and have a say here. It provides a little bit of light and fun because it’s hard work here. 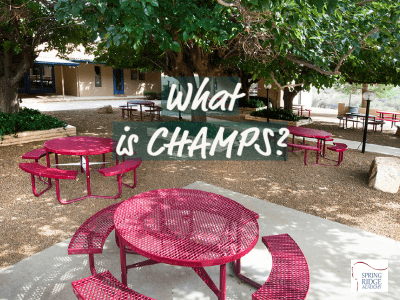 What does CHAMPS stand for?

P: No one knows, but it’s something good.

And what is the CHAMPS mission statement?

P: To better the community as a whole, bring everyone together, and add more spice to Spring Ridge Academy.

What do you get out of CHAMPS?

P: It gives me a voice in the community… let’s me help out and ties into the mission statement.

S: I’m secretary right now. I’m pretty new to CHAMPS, but I like it because I have pretty good leadership skills, and it’s a really good way to help the community and have a say here. It provides a little bit of light and fun because it’s hard work here.

What attracted you to CHAMPS?

P: Originally, it was because my friends were doing it, and I was encouraged to run for president. Running gave me a chance to step up and take a leadership position, and I think it helps me out.

S: After I turned eighteen, everyone was saying I was going to be a really big leader on campus, but after I turned eighteen, nothing really changed. Everyone kept saying for me to apply to CHAMPS, apply to CHAMPS, and I thought they were just trying to recruit someone. I mean, that’s what we do. But the more I started talking to treatment team and program team, I thought it would be a really good thing for me to do. I wanted to be more involved in the community and showcase being a good leader.

What are the challenges and benefits of being in CHAMPS?

P: At least right now, it’s a small group in CHAMPS. We only have three people, so we’re trying to listen to people’s voices in the community and trying to figure out how to do that so that we cater to everyone’s needs basically. The benefits are that I have a voice, and I’m going to put it on my college app, so that’s helpful.

S: For me, a drawback is that it’s hard to meet everyone’s needs, like planning Friday night activities when we try to do something fun. Most people find it fun, but it’s hard when some won’t participate because we put a lot of effort into it. It’s not as fun to plan when they don’t appreciate it. A really big plus to being in CHAMPS is that I’m putting in my college applications now, and this helps but also that I have a voice in the community and I’m actively making changes.

Any plans around what you see CHAMPS becoming?

P: I’m really hoping more people apply. We can help more if we have more people on deck. Right now, we’re just trying to revamp things like the student handbook because a lot of the stuff is outdated. We’re trying to bring new things here.

What I have always wanted to see is a CHAMPS table with signs up where people can come up and talk, like a high school or college campus would have. You could use it as a way to recruit and be more visible.

S/P: I hadn’t thought of that. Could be a good idea. There’s a lot to think about.

What else would you like to say to the campus?