Children should be encouraged to explore their imaginations, create games, instruct others on how to play, and learn to accept instruction from others.​ 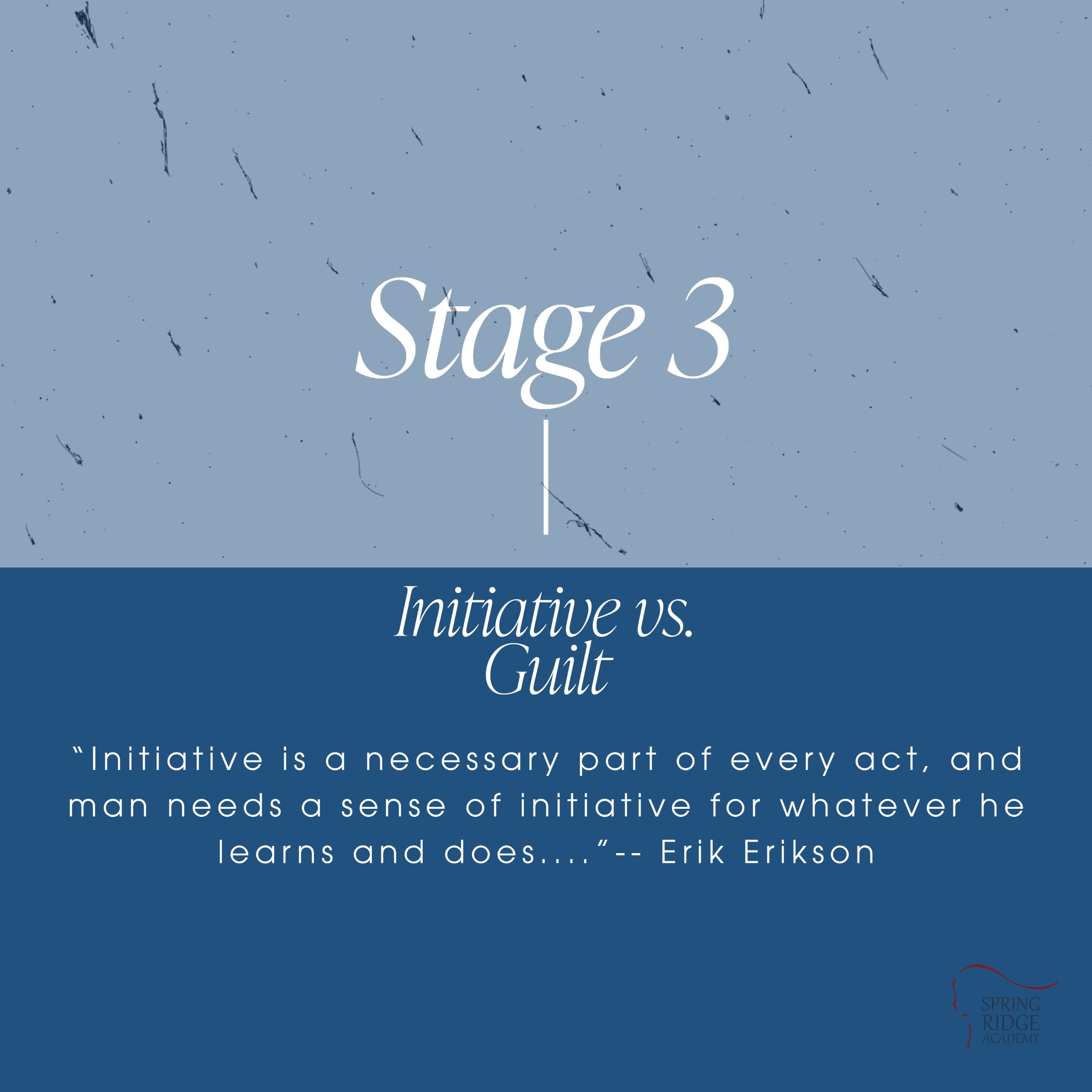 Erikson’s third stage deals with initiative vs. guilt, and the virtue is purpose.  Stage 3 builds on the autonomy stage and is strengthened by both independence and limit setting.  Like most stages, this is a balancing act of learning to initiate activities and play and trying out leadership. At the same time, children are learning to balance their independence by creating relationships with others.  Guilt is a necessary element in establishing empathy’s beginnings; however, too much guilt stifles initiative and independence.

What Is Learned in This Stage?

Children should be encouraged to explore their imaginations, create games, instruct others on how to play, and learn to accept instruction from others. Through this process, children learn limits around what they can control in the natural world and the difference between reality and imagination. In addition, a child learns what behaviors they initiate that get positive results and negative results.

Further, they are learning how actions impact the world around them.   Imaginary friends and fantasies may assist children in working through social dilemmas and initiating forms of play.  At the same time, children learn the laws of nature through natural consequences (i.e., I can’t fly no matter how much I want to).  Abundant is curiosity and exploration.  The word “No” so prevalent in the previous stage may be replaced with “why.”

Ultimately, the concept of purpose allows us to choose our own direction and plays strongly into identity and value development.

Parents assist children by allowing an environment of freedom that is not overly structured or controlling and helping the child learn the limits of what they can control and how to play well with others. Within reason, negative social interactions may encourage children to be less pushy or use their voices to set limits with others.

Parents can be of support by pointing out mistakes and helping the child problem-solve. For example, child may be allowed to play in the mud but be asked to clean up the mess when they drag the mud inside. Later, parents can coach them not to wear their good clothes in the mud and wash themselves off before coming inside.

Parents are most effective in setting limits on children’s behavior and encouraging other adults, peers, or siblings to voice their feelings and set limits.  Children should be encouraged to take turns in leadership and followership roles.   Children may make up fantastical tales and stories. Parents must help the child learn the difference between imagination and dishonesty.

Children of this age may seem selfish, pushy, or controlling and treat others poorly when they do not get their way.  These behaviors are part of the child learning social interactions.  Parents mortified by this behavior may respond harshly, creating a feeling of guilt in the child. Parents who do not set limits may encourage disrespect.

Issues Developed from Unsuccessful Completion of this Stage

Issues that may arise later in life if this stage is not successfully completed tend to resolve around the inability to initiate activity, needing to be in control, or struggling with magical thinking.

Magical thinking occurs when one expects problems to go away or things to happen without taking actions to impact the outcome.    Another form of magical thinking may be to assume we know better even if we are not qualified in this area.

Other issues may arise when one fails to initiate or proactively get needs met. One may feel guilty for acting on their own behalf (i.e., asking for a raise) or wait for someone else’s direction even though one can complete the task independently.  The opposite may also be true when we assume we know better than others or do not seek their input in decisions.

Erikson’s third stage is a critical step in the development of purpose and initiating action in furtherance of that purpose.   When children experience excessive guilt or harsh punishment related to initiating action, they may be reluctant to initiate actions in the future.  At the same time, children who experience no consequences for their actions may end up struggling with interpersonal relationships, setting limits for themselves, and magical thinking. On the other hand, success in this phase allows one to initiate actions toward their own purpose, use creativity to problem solve, and practice both leadership and followership roles.

A Brief Overview of Erikson’s 8 Stages of Development

Childhood and Society by Erik Erikson